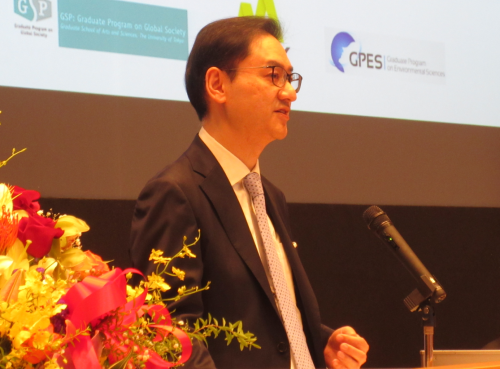 Congratulations on your admission to the Graduate School of Arts and Sciences and the College of Arts and Sciences of the University of Tokyo. As the dean here at Komaba, I would like to welcome, with the greatest enthusiasm, each one of you who has just joined our community.

The University of Tokyo was established in 1877. Its roots were in the Kaiseisho, or Institute for Western Studies, that was established by the Tokugawa shogunate. Over the course of several reorganizations, it grew into Japan’s leading university, with ten undergraduate faculties and fifteen graduate schools. Our graduates include eleven Nobel Laureates as well as many scholars, engineers, businesspeople, politicians, and employees of government and international organizations throughout the world.

One of the main features of education at UTokyo is our emphasis on the liberal arts. With the recent rapid improvements in artificial intelligence, some scholars fear that we may be approaching a singularity, that is, a point at which the abilities of computers surpass those of human beings. AI could then handle relatively simple mental tasks and many people might lose their jobs. People like you could lose out to artificial intelligence in your lives ahead if all you do is mechanically absorb facts. The key to avoiding that dead-end is the liberal arts. Also called “learning for human liberation,” a liberal arts education enables you to integrate many areas of knowledge and acquire the principles of human thought. You thus become able to think freely and autonomously. Even if the AI singularity does occur, your education rooted in the liberal arts will enable you to maintain an active presence in the world of tomorrow.

I therefore encourage you to be receptive to the wide range of views and values on this campus. From your own backgrounds, this island nation of Japan with its unique history might seem a bit strange. But Japan has much to offer. In the area of environmental protection, for example, as long ago as the Edo Period people in Japan had developed ways to create forest ecosystems, called “satoyama,” with which they could co-exist. Our country also has a long history of incorporating elements of other countries’ cultures. Even food regarded now as typically Japanese has foreign influences. One example is tempura, which has its roots in Portuguese batter-frying. While you are here at UTokyo, I hope you will take the opportunity to learn more about the distinctive cultures of Japan.

One reason I make that suggestion is that PEAK and GPEAK were established in 2012 as the first programs at UTokyo in which students can graduate by studying only in English. One goal for these programs is to bring in students from throughout the world and enable more UTokyo graduates to contribute and thrive on the international stage. But if all we offered were classes in English, you could do just as well to study in the United States or the U.K. In recent years, though, it has become increasingly clear that those countries alone cannot solve the many problems facing the world today. We hope that by studying here in Japan, an Asian country with a unique history that is different from that of the West, you will encounter a broader range of thinking, learn how to make contributions that transcend cultural barriers, and acquire a stronger commitment to the global environment. So while you are here, please take part not only in your PEAK and GPEAK classes but also in active exchanges with April-entry students and in internships at Japanese companies and organizations. And please do your best to improve your Japanese language ability so that you can get to know regular Japanese people as well.

All of us on the faculty and staff at Komaba will do everything we can to ensure that your experience here at the University of Tokyo is fulfilling and enriching. We hope that, by the time you graduate, each one of you will be ready to make a positive impact on the world.

Thank you all very much. 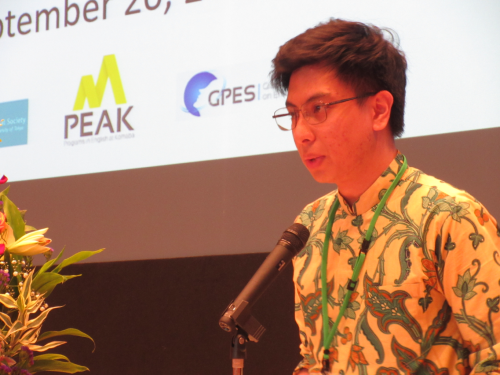 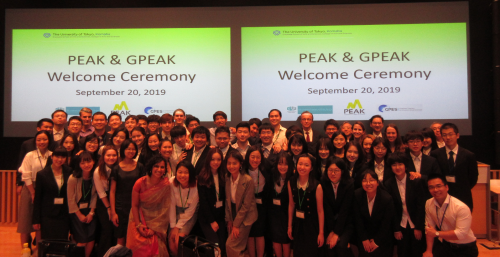