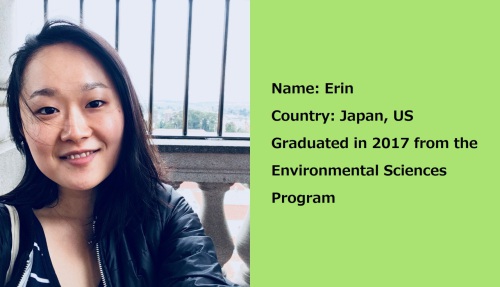 Hello there! I’m Erin and I graduated from the PEAK Environmental Sciences program in 2017.

Why PEAK? This is a question I get often. Although my parents are Japanese, I was raised almost completely abroad, so I was, truthfully, a little apprehensive about attending college in Japan. (My language ability was definitely not up to par, something my Japanese professors can verify.) However, one appeal of the PEAK program was that Japanese language ability was not an admissions prerequisite, but a skillset that students would build once enrolled. I am not going to lie: things were rough at first, but I slowly came to appreciate the challenge and, with that, my language skills undoubtedly improved. For me, PEAK was a great way to learn in a world-class institution in English while reconnecting with my parents’ culture and language.

The opportunities I found during my four years were unexpected, but contributed greatly to my growth. The broad, interdisciplinary nature of the PEAK program gave me the necessary exposure to various topics in the field, from the basic sciences to environmental policy, to know what I wanted to do afterwards. Through coursework and projects from the PEAK and the University’s Global Education for Innovation and Leadership (GEfIL) programs, I discovered my interest in how the natural and built environments affect population health. At the same time, my graduation thesis project during senior year allowed me to become acquainted the (sometimes painful, but ultimately rewarding) process of primary research and gave me a deeper understanding of my field of focus (in my case, this was molecular and cell biology.)

PEAK also gave me a community so diverse that I thankfully never felt out of place. It sounds like a cliché, but it’s true. Yet, I was surprised to find myself in a community of people who, despite having lived in different countries or have different values and belief systems, shared key similarities in experiences of growing up. The great mix of people at PEAK ultimately created a space where I could comfortably challenge others and be challenged. In retrospect, this intimate community of insightful and talented peers was exactly where I needed to be to take my learning forward.

To build on everything that I had learned in the environmental science program, I chose to pursue a Master of Public Health at Columbia University Mailman School of Public Health after graduation. At the Mailman School’s Department of Environmental Health Sciences, I honed in on my interest in urban health, completed a master’s thesis on the urban and socioeconomic predictors of air pollution, and received a Certificate in Climate and Health. To my surprise, the foundational understanding of the scientific, social, and political aspects of the discipline I had gained as an undergrad prepared me for a diverse range of discussions throughout my two years in graduate school and allowed me to make connections in my specialization.

From June, I am excited to be applying everything that I have learned in and outside the classroom to my full-time job at an environmental think-tank in Japan. My journey through PEAK and beyond has taught me that I have still so much to learn, and I look forward to the new opportunities (and challenges) that lie ahead.